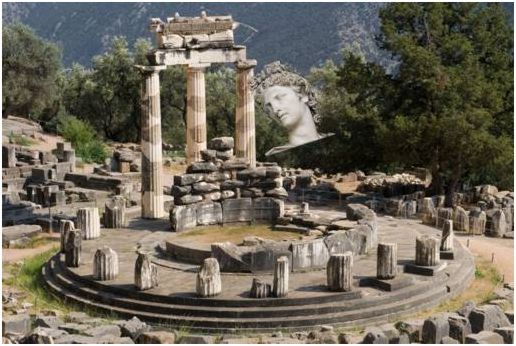 The greatest oracle in the history of mankind is the famous Oracle of Delphi.
The name Delphi comes from Dolphins, since Apollo on his return from Crete, driving the ship with the Cretan sailors and craftsmen who would stay there to build his temple, took the form of a Dolphin.

During the 7th century BC. Delphi became the strongest and most economically strong city in Greece. 20 marble treasurιes have been erected to house the world’s most valuable and incomparably beautiful offerings. Every powerful city in ancient Greece had its treasury built in Delphi.

The Oracle of Delphi combined the Divine Mania of God, the ideal place, the navel of the Earth and of course the Holy Enthusiasm of the Pythians.
Apollo, as the God of light, chases away darkness from the human mind and enables him to predict the future.

During Heroic times, the Oracle is not associated with a place, but with persons such as Tiresias, Calchas, Amphiaraus, Cassandra, or the spontaneous divination of the Sibyls.
Over the years, the Mantic Art was associated with a specific and sanctified location and the “branded” Oracle Divination receded to the power of God and of the place. The individual is now in second place, and the Prophetic gift is transmitted through God and the attributes of the place.